A message from the Chairman 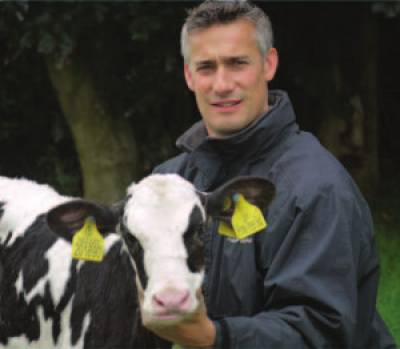 “The year 2013 will mark the 68th annual Cattle Breeders Conference, held by the British Cattle Breeders Club, which was founded by Sir John Hammond and George Odlum in 1947. The first meeting took place in 1948 and has grown from its early beginnings, to become an important event in the livestock calendar.

“The Conference has a well-deserved reputation for addressing the issues and challenges faced by today’s cattle breeders. This year will be no different, with guests from around the world bringing a global perspective on the industry. The subject matter throughout the event (21-23 January) will be wide-ranging; from the latest scientific developments, through to the more practical topics, where some of the most forward-thinking cattle producers will outline their views.

“However the official programme is not the only point of interest; the Conference is also a great social occasion. It gives delegates the chance to catch up with old friends and colleagues and mull over in private some of the thought-provoking ideas that have been put forward during the daytime sessions.

“Non-members are welcome to attend the conference, although we would encourage anyone with an interest in the UK cattle industry to join our organisation. Membership is just £25/year.”

Conference: The time and place

The British Cattle Conference will be held at the Telford Golf and Spa Hotel from 21-23 January, 2013

Delegates are also invited to attend any or all of the workshops on Monday 21st and Tuesday 22nd which are offered free of charge.

Day rates are £104 for members (£130 non-members) while cost-effective packages are available to include accommodation and participation in all the social events.

Dairy farmer, Andrew Higgins will explain how he made the move from a low input system of concentrates and grazed grass in the summer, to a feeding regime where conserved forage and a TMR diet is fed all year round. An outdoor loafing yard is provided for his ‘Wilderley’ pedigree Holsteins, whose average yield now tops 12,000kgs a year on three times a day milking.

The Higgins family have, for two years running, won the Chris May Memorial Award for the herd with the highest average lifetime daily yield, among NMR/RABDF gold cup qualifying herds. The 290-cow herd achieved a lifetime daily yield of 18.22kgs, for the year ended September 2011.

“This figure requires a calving age as close to 24 months as possible and good longevity,” says Andrew, who farms with his brother Bill and parents, Bill and Margaret. “Cows must not be dry for too long and need to be milking to their full potential, while keeping fit and healthy.

“I would not say that aiming for high yields is an easy way to make a profit, but for us, the interest lies in taking on the challenge of providing the right diet, living conditions and husbandry, to allow the cows to reach their full genetic potential. This gives us a great deal of job satisfaction,” he says.

Ben was brought up on a beef, sheep and arable unit in Dorset and then completed a degree in agricultural economics at the University of Reading. His career has included a spell at DEFRA as an economist, before working for the Meat and Livestock Commission.

In 1997, Ben moved to NMR. As part of his current role, Ben has been working on the development of a new range of fatty acid profiling services. In 2012, a four-year project, supported by the Technology Strategy Board and involving NMR, the Scottish Rural College and Marks and Spencer, got under way.

While it is still in the early stages, it seems there is a real prospect of assessing the heritability of fatty acid profiles. This could help to breed animals that will produce more desirable fatty acids, benefiting both animal and human health.

Mark Robins looks after the 1,750-acre Farley Farms Estate near Reading and is chairman of the Marks and Spencer National Milk Pool. The Estate’s 200-cow dairy herd has been involved in trials related to healthy milk, using feed to manipulate saturated fat levels. The result was an average 6% reduction in saturated fat content. It was achieved mainly by removing palm oil from the diet and replacing it with other natural ingredients, including linseed.

Breeding Solutions for a Profitable Future

He has recently been invited to become a consultant to the Chinese dairy industry, to help expand the country’s milk production.

Before taking on his current role, Dr González ran his own dairy unit and worked for the National Institute of Livestock Research in México. He also has a degree in veterinary medicine.

Our Enterprise and the Wider Beef Industry, Fit for Purpose?

Mike and his family run just over 100 suckler cows at their farm near York. The current breeding policy is based on South Devon females, which are artificially inseminated using Limousin semen.

His talk will question our current systems of measuring beef cattle performance, given that only around 50% of UK finished cattle meet the desired quality and weight specifications.

“On a visit to New Zealand, I found that one key performance indicator was daily deadweight gain,” says Mike. “There was also a strong focus on profit per kilogram of grass dry matter produced.

“These measures take into account fixed and variable costs, and I think that the concept deserves careful consideration. It is highly accurate and centred more around profitability, compared with the current UK system.”

American Jersey Cattle Association: an organisation fit for the future?

Rachel completed a whistle-stop tour of Jersey cattle herds in the USA in late autumn and returned home with plenty of food for thought.

She was particularly impressed by a producer group in California, which has set up a cheese processing plant. Members of the ‘Hilmar’ group, who keep Jerseys and Jersey crosses, produce milk for unbranded cheese which is sold on under the buyer’s name, explains Rachel, who is the UK Jersey Cattle Society’s breed development officer.

“One herd I visited was linked to a similar group, which processes Jersey milk for cheese in the Oregon region. This individual producer had 25,000 head of cattle.

“The structure of these organisations avoids the producer members getting into a situation where they are competing against their own market. However, most farms had many more cattle than we see in the average UK Jersey herd. In order for us to replicate the idea, we would probably have to go for a blended product, adding milk from black and white cows to our members’ own milk,” she says.

Rob graduated in veterinary science from the University of Liverpool in 1989 and also has a degree in biochemistry. He returned to the University to complete his PhD and join the farm animal lecturing staff, where he has a research interest on the effect of stressors such as lameness and mastitis on reproduction.

Rob has become increasingly involved in knowledge exchange projects, most notably as the lead academic in the Tesco Dairy Centre of Excellence project at University of Liverpool’s Wood Park Farm. His talk will cover the concepts behind the revised Tesco Livestock Code of Practice, which was launched in 2011. It aims to simplify measurable targets on animal welfare and milk quality, by setting a number of cow and milk-based ‘outcomes’ for its suppliers, rather than issuing prescriptive rules on farming methods.

Information on lameness, for example, is uploaded on to a group database, which allows producers to benchmark their herd’s performance against others in the group. There are 17 ‘absolute’ standards and 15 outcome measures, developed in response to customer concerns about health and welfare. Rob will also speculate on how animal breeding might help farmers to meet these outcome measures.

Tracey was brought up on a farm in Wales and her interest in farming continued at Bangor University, where she studied agriculture. She is now a researcher within the Animal and Veterinary Sciences Group at SRUC (formerly SAC).

Her research is linked to EGENES, which provides national genetic evaluations for cattle and sheep in the UK. Referring to national datasets, she analyses possible new traits for use in genetic evaluation. These include disease traits, improving livestock health and farm enterprise sustainability.

Currently, the genetic improvement of beef carcass traits in the UK use weight and ultrasound measures taken on live cattle. These are mainly recorded on pedigree animals, whereas carcass phenotypes are mostly measured outside the pedigree sector. The use of abattoir data provides the opportunity to collect detailed information on the slaughter population. Her project demonstrates that pulling data together from various sources can help with the production of carcass trait evaluations. This should reduce the current knowledge gap between pedigree breeders and commercial beef producers, she says.

Steve and his wife, Penny, own and manage the Radakovich Cattle Company, which produces seedstock Angus and composite cattle in Iowa and Nebraska. The business sells around 100 forage-fed bulls each year.

Steve, who is a past president of the Beef Improvement Federation, spoke at the 1999 BCBC conference and we welcome his return in 2013.

His topic will concentrate on the global changes which will affect beef cattle production and how the industry might respond.

The Future of the UK Suckler Herd: Morrisons’ perspective

Andrew is farm operations manager of Wm Morrison Supermarkets and Woodhead Bros. He will outline the supermarket’s role in supporting the UK beef industry, in a climate where both numbers and profitability are on the decline.

A bright future is in store for beef farmers, he says, as long as they can change and adapt, to meet current buyer demand.

“I can see our beef industry moving towards a more stratified system, more like that used in the sheep industry. A hardy native breed would be used on marginal land, while Continental-type sires would produce the terminal generation,” predicts Andrew.

Another subject he will cover is Morrisons’ recent announcement that it is seeking to increase its weekly kill of Beef Shorthorn-sired cattle by 15% (more than 400 head), to supply its native breeds’ scheme. Suppliers are being offered a 20p/kg premium over base price, or up to £75 a head, with other eligible native breeds paid a 10p/kg premium.

The ‘Any Questions’ evening is a much-heralded event that has become a firm fixture in the conference event programme, and this year’s panel promises to be both entertaining and informative.

The event will be held on the Tuesday evening and follows a champagne reception – sponsored by Genus ABS and Holstein UK. Also preceding the session is the presentation of Holstein UK’s president’s medal, not to mention an excellent dinner, with beef kindly donated by Waitrose and Dovecote Park and wine by Shepherd Publishing. The 2013 ‘Any Questions’ panel has been hand-picked, in order to guarantee a lively debate.

David Warrington is the managing director of the feeds division of NWF Agriculture, which supplies ruminant nutrition across the country, feeding one in seven dairy cows across Britain. He was appointed to his current role in 1995, having joined the organisation in 1993. Mr Warrington previously ran his own feed merchant business.

NFU vice president, Adam Quinney, has sheep, suckler cows and a beef finishing unit on his farm, which is situated near Redditch on the Worcestershire/Warwickshire border. A former Henley NFU branch chairman, NFU Council representative and NFU West Midlands regional board chairman, Mr Quinney has pledged to improve communication to members. He is a champion of social networking and video conferencing.

Pete Nicholson worked on various farms during his school years and went on to obtain an HND in Agriculture. In 1979, he joined the English Milk Marketing Board, eventually becoming regional operations manager for North Wales and the Midlands. After a brief spell with Milk Marque, Pete joined Robert Wiseman Dairies in September 1995. As milk procurement director, Pete has overseen the growth in the Wiseman Milk Partnership and recently took on a new role as agricultural affairs manager.

He has been the company representative on many industry organisations during this time, including president of the Scottish Dairy Association and chairman of the National Dairy Farm Assurance Scheme.