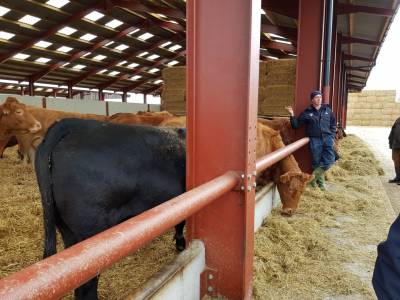 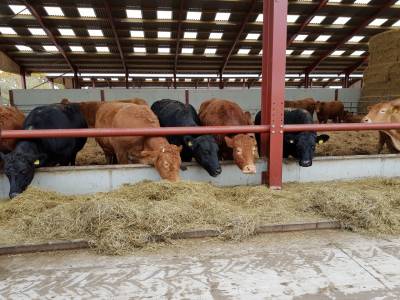 Mike Powley has taken knowledge from Gabe Brown, a US cattle and sheep farmer, who is regenerating landscapes for a sustainable future and believes that improving soil health is a priority and practices no-tillage.  At Oak House farm conservation tillage/no-till is used to establish crops and as a result, Mike has seen improved soil health with crops yielding approximately 10-15% more.  The arable enterprise grows winter wheat, winter and spring barley, spring beans and red clover for silage in the rotation and 20ha of cover crops are grown each year.

Previous to the new farmstead the farm was split over three sites, the new buildings have enabled Mike and his father, Tom, to house the herd on the same site.  The buildings are animal focused, light airy and machine friendly enabling general animal husbandry to be performed with ease.  The dedicated isolation/handling building has multiple adaptable pens which are also used during calving.  The handling area comprises of a round tub with a curved race leading to the manual crush with electronic weigh bars and EID linked to a Gallagher weigh head.

The aim is to increase the suckler herd to around 120-130 cows.  They are currently based around South Devon x Limousin home bred cows, with Norwegian Reds being trialled in place of the Limousin.  Mike explained that the Norwegian Reds could bring greater fertility and managements traits such as feet, udders, smaller cow and mastitis resistance into the herd.  The heifers are calved at two years old, with the first Norwegian Reds calved this Spring, to easy calving Angus, heifers are then subsequently served to British Blue and some to Charolais.  AI is used throughout, there is no stock bull on farm and EBV’s are used when choosing sires.  The Genus Breeder tag system is used to track cows for service, and an AI technician is used.  The conception rate is 74% with the Norwegian Reds at 86%, and a calving interval of 364 days.  The herd is spring calving, over a nine-week period and the calves are weighed at birth.  The calves are weaned at housing at the end of October/early November.   The cows are rotational grazed throughout the summer on two-day paddocks.

At housing all cattle are weighed.  The cows are restrict fed silage and straw, with a reducing body condition score for easier calving, resulting in just 4 or 5 assisted calving’s a year. Throughout the winter the calves are weighed every three weeks and growth rates are monitored and recorded. The bulls are fed red clover silage and a home-produced barley/bean mix, with molasses and minerals being the only bought in feeds, and are fast finished over the winter and sold at 13-14 months old at 400-420kg compared to around 500kg previously.  The heifers are fed the best quality red clover silage and some barley/maize gluten over winter. Then turned out to graze and are finished off grass or rehoused in the autumn and “fast finished” on the same diet as the bulls. All are sold by 20-21 months old.

The Powley’s have recently started a Box Beef scheme, selling beef locally in 10kg boxes, which is proving popular.  An informative visit to a family farmstead who have made changes to their breeding programme and utilised the information and technology available to them to produce a sustainable end product.  Mike Powley will be speaking at our conference in January, where he will speak further on his breeding programme and the direction of the suckler herd, and how he is preparing the farm’s soils for the future using carbon to make them a stable and sustainable asset for the next generation. 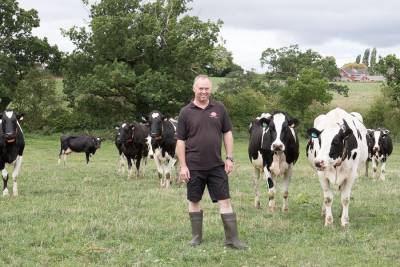 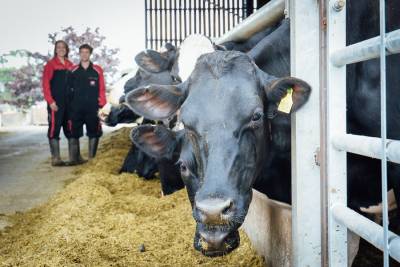 Our first visit was to Bridge Farm, Edstaston by kind permission of Neale Sadler, a small family dairy farm milking 70 Holstein cows, with 90 heifer replacements and 25 beef stores.  At 85m above sea level with between 760-1000mm annual rainfall, Neale farms over 200 acres, growing a variety of crops for feed with grass, maize, winter wheat, winter oats and lucerne.  Alongside the family farm Neale runs a successful contract baling business.

In 2003 Neale and his father ceased milking due to staff and infrastructure issues, and after extensive research and planning Neale resumed milking again in 2006, this time through an A3 Lely Robot.  The cows were originally housed on a straw yard, but Neale found this didn’t suit the system or the cows, the distance to the robot and mastitis were the main issues.  Neale converted an existing building into a slatted yard with cubicles and built an underground slurry store.  The mastitis problem disappeared but did find cows slipping a problem.  Rubber matting was installed and massively improved fertility and yields, the cows were visiting the robot more regularly (on average 3x a day) and showed natural signs of heat.  The cows have the benefit of being able to graze once they have been milked by using the grazeway gate, other technology used includes the discovery barn cleaner, lunar brush and out of parlour feeders.

Neale said ‘installing the robot was one of the best decisions ever made’ adding ‘the cows are in a stress-free environment and by decreasing the stress thus increasing fertility and performance.’

In May 2012 Neale was producing milk on a Muller contract and during that summer he decided to test the whole herd for the A2 variety of beta casein protein - 43% of the herd tested were A2 cows, compared to an average of 33% in other herds.  Neale sold the non A2 cows and slowly built up the herd to become 100% A2 cows and started supplying the a2 company with A2 milk.

Neale explained that ‘milk can contain A1 and A2 varieties of beta casein, however the A2 variety is better for lactose intolerant people’ he added ‘that generally a third of cows will be A2:A2, a third A1:A2 and the other third A1:A1’.  The A2 milk his cows produce doesn’t contain the A1 protein which 1 in 5 people find difficult to break down’.  Neale concluded ‘in my personal experience of drinking only A2 milk I have noticed that the eczema I had has disappeared.’

Neale currently tests all of his calves at birth for the A2 protein which is tested and paid for through Muller.  Neale receives 2.5ppl above the standard milk price on the milk that is retailed as A2.  The management system of his cows is still the same the only difference is when selecting sires to ensure they are A2 certified.

Our second visit took us to Meadow Bank Farm near Cantlop, by kind permission of Steve and Ruth Ashley, another family run dairy unit running a closed herd of 130 Holstein cows and rearing all replacements.  The farm consists of 113 acres owned and around 300 acres rented, growing maize, whole crop, multi-cut silage, hay and haylage.

The cows are milked through two A2 Lely Astronaut robots, the first robot was installed in 2013 with the second in 2017.  The barn is split into two halves, with a robot on each side.  The cows are currently averaging 45 litres a day and have reached 50 litres a day during other times of the year, averaging 13,500 to 14,000 litres.  The herd was the 5th highest performing Lely robot milked herd in the world.   The herd is all year-round calving with the cows housed and on average visiting the robot 3.7 times a day.  The cubicles are sand bedded and topped up weekly whilst the cows are being fed.

Ruth and Steve, along with their herdsman, John, meticulously study the health reports provided by the robots and the cows looked at routinely every morning, Ruth explained ‘you have got to use the data, healthy cows equals milk production’.  The rumination data is regularly monitored, along with ketosis and acidosis.  Regular vet visits and foot trimming are also part of the on going health monitoring of the herd.  All calves are BVD tag and tested and johnes is monitored quarterly through milk samples with high reading cows no longer bred from.

Sexed semen is used on their heifers and the best producing cows in the herd, calving the heifers at 23-24 months.  When choosing sires Ruth focuses on health, fertility, mobility, calving ease and milking speed.  The herd currently has a 396 day calving interval with 33% PD+ at first service and 91% in calf by 100 days in milk.

Steve and Ruth have a meticulous long-term plan with continuous improvement and when asked if they will look at adding a third robot, Steve replied ‘we are planning for a third within the next 10 years but we need to ensure we have everything else right first’ he concluded ‘that the next building will be a dry cow shed.’

Both farms gave an incredible insight into two different dairy units, both looking ahead to a future in the dairy industry and ensuring that they continue to maintain high standards within health and welfare of their herds, and providing a stress-free environment whilst continuing to provide a healthy end product.