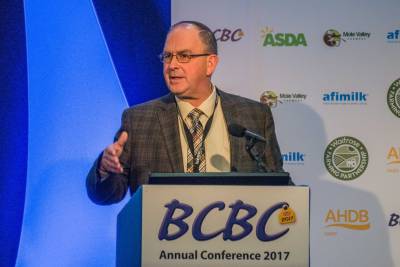 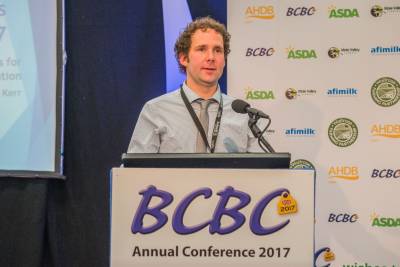 Two of the speakers on beef day at the recent British Cattle Breeders Conference were Jerry Wulf, of Wulf Cattle, a breeder based in Minnesota USA and Welsh cattle producer Meilir Jones, a former Farmers Weekly ‘Beef Farmer of the Year’ award winner.

Jerry Wulf’s presentation entitled “Advanced Technology in the Beef Supply Chain.” focused on the use of technology in beef cattle production.  He outlined his family’s integrated beef production business, which covers three states in the USA; Minnesota, South Dakota, and Nebraska. Wulf Cattle was established 60 years ago as a beef cattle feeding company and the family has since added an improved genetics programmes, based on the Limousin breed. Cross breeding is combined with heterosis, to produce cattle which perform to a high standard and yield a high quality carcass.

“Genetics steer the whole beef supply chain,” said Mr Wulf. “We can remove a great deal of risk, by using proven genetics to give more predictable production outcomes and costings. Without quality genetics as a starting point, it is impossible to achieve this goal and for us to compete using superior production practices alone.”

“Continuous genetic improvement within a breed population is a must; it can in no way replace the significant genetic progress potential within a commercial beef production system. Our programme is based on utilising complementary cross-breeding and heterosis, with the Limousin as a terminal sire, cross-bred Aberdeen Angus-based cows for beef cow production and the Limousin cross Jersey and Limousin/Angus/Holstein for our commercial dairy cow production.”

Meilir Jones impressed the audience with his description of the use of technology to improve the profitability of the cattle enterprise at Gop Farm, in Flintshire.  He explained that he buys in more than 1,300 store cattle annually, sourcing the animals from a number of designated local farms. Using EID to help him monitor cattle performance, he weighs his animals on a regular basis and has formed a clear picture of the genetic background of those animals which will meet his stringent production targets.

“People talk a lot about breeds, but my concern is to find the top performing animals within those breeds,” said Mr Jones. “In my region, most cattle are crossbreeds, but within the composites are examples that can represent the best, or the worst, of those breeds, in terms of genetic potential. As an industry, I feel we should be concentrating on the best and breeding from the best."

“EID has simplified the exercise of determining the costs associated with my beef cattle production system and helped me to understand in detail, how much it contributes towards total farm income.”

The scrutiny of Mr Jones’ cattle monitoring system has uncovered a figure of 1.1kgs of daily liveweight gain, which he requires of his cattle, in order to cover feed costs. This awareness allows him to sell those cattle which fail to meet his profitability targets earlier, compared with the main group.