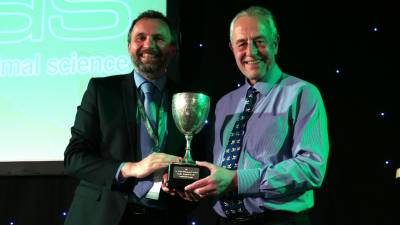 The Society (BSAS) is delighted to announce Professor Phil Garnsworthy as the recipient of the prestigious Sir John Hammond award 2022. The award was re-launched in 2021 in collaboration with the British Cattle Breeders Club (BCBC).

Phil Garnsworthy is a highly celebrated figure within the global animal science community, for his extensive research and invaluable contribution to the field of animal production, having collaborated on a number of international research projects during his 41-year career. Currently the Professor of Dairy Science at the University of Nottingham, Phil also leads the AHDB Research Partnership on Animal Health, Welfare and Nutrition. The main theme of his research is to optimise resource use and profitability of animal production systems, while reducing their environmental impact. A gifted scholar, Phil has authored and published more than 200 academic papers, to much acclaim from his fellow animal scientists and technologists, and in 2019, he was awarded the prestigious Leroy Fellowship, by the European Federation for Animal Science, for ‘an outstanding scientific contribution to Animal Production over a sustained period.’

‘I feel very honoured to be receiving the Sir John Hammond Award 2022. Although the award is made to me personally, the research is very much a team effort. I would like to acknowledge the many colleagues, postdocs, technicians, and PhD students that I have worked with over the years. Collectively, we have pushed back the frontiers of dairy science, and I accept the award on behalf of the whole team.’ Professor Phil Garnsworthy.

Highly selective, the Sir John Hammond Award is based solely on nominations and is awarded to those who have made significant contribution through research, teaching, knowledge exchange, breeding, farming industry or affiliated professions.

‘Phil’s extensive research and invaluable contribution to the field of animal production has identified him as a world-renowned leader in the animal sciences.  Alongside his incredible research career, Phil has also been an enormous supporter and inspiration to the next generation of animal scientists, having supervised more than 30 PhD students. Extremely generous with his time, Phil is often to be found sharing his expertise at various early career workshops and webinars, as he strives to give the animal scientists of the future, the foundation they need to flourish. The awarding of the Sir John Hammond Memorial Prize demonstrates BSAS’ appreciation and recognition of all he has accomplished.’ BSAS President, Professor Michael Lee.

This is the Society’s first ever joint award with the BCBC, which Sir John Hammond founded in 1946. The club aims to improve the breeding of livestock, by promoting knowledge through collecting, collating, and distributing available information and data if practical and scientific interest, to breeders of cattle at home and overseas.

‘Phil has been a dedicated servant of the farming industry for his entire career. In fact, he was a lecturer at Sutton Bonington when I was a student there! His work has been at the forefront of applicable science enabling UK farmers to benefit quickly from research developments. Phil was the first to take up the challenge of work on greenhouse gas emissions from cattle and provided much of the early impetus that has led to the current focus. His work is not over – the recent increases in inputs prices draws even more focus on the work he has done on resource use efficiency and ensures the legacy of his body of work will continue to be felt for many decades to come. A thoroughly deserved winner of the Hammond Award.’ BCBC President, Professor Mike Coffey.

Phil was presented with his award which was supplied by ‘The Smithfield Forum’ -  www.royalsmithfieldclub.co.uk  on Wednesday 13th April at the BSAS 2022 conference.