Menu
< Sponsors Feature - ADF Milking: Stress-Free Milking for You and Your Cows. James Lywood from Battlehurst Farm talks to Karen Wonnacott about his experience with ADF Milking’s InVent 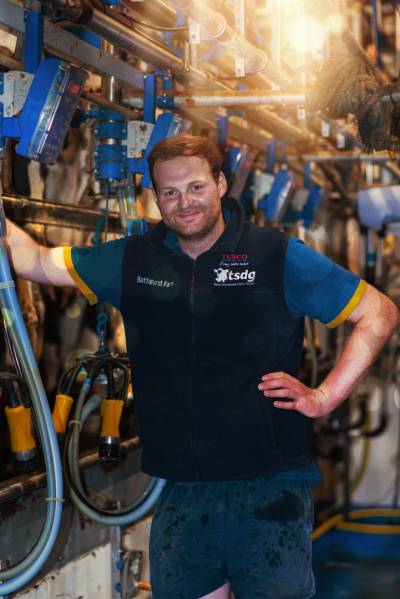 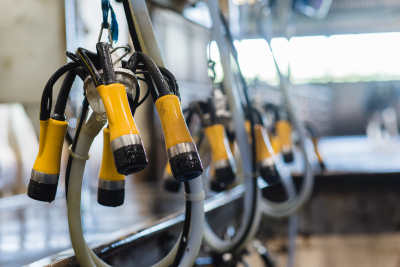 Join us for a lunch workshop during the BCBC Conference, where James Duke will introduce the concept of “intelligent venting” to help combat the adverse effects of high vacuum levels on teat health. Hear directly from award winning dairy farmer James Lywood from Battlehurst Farm in West Sussex what he thinks about ADF InVent and what benefits it brought to his farm.

James Lywood manages an 18-point Herringbone parlour, milking a herd size of 200. He installed ADF in August 2020 and installed InVent in December 2020.

‘Each milking was taking 3.5 hours. So, adding more cows – two or three more rows – would have pushed this to at least four hours per milking. I was sure the ADF system was a way to milk more cows through the same parlour, and with the same number of staff, without taking more time. And I wasn’t disappointed. Cows are milked twice a day by one person. We are pleased with the performance of the automatic cluster flushing and teat dipping – not least because it’s shaved 20 minutes off milking time.’

The ADF InVent system automates the post-milking hygiene routine to a higher quality and with more reliably consistent results than many other alternative methods – saving time, reducing labour costs and more efficient use of consumables and resources.

‘It’s done what we hoped it would do, and we know we’re not compromising udder hygiene or the milking routine. I don’t like things to be complicated, for the majority of milkers, it’s a case of spray, wipe and clusters on. And the ADF system does the rest once milking is complete.

It’s given us peace of mind. And it’s saving time. So, as we begin to add more cows, we’ll be able to milk the larger herd and keep within three hours in the parlour. This also means the interval between the two daily milkings will stay the same and we have been able to start milking a little later in the morning, at 4.30am. And the afternoon milking starts at 3.00pm.

The herd’s average somatic cell count has always been pretty good, but it’s fallen by 15,000 cells/ml since installing the ADF and InVent. Average SCC now stands at 113,000 cells/ml for the herd. Prior to installing the ADF system, only 7% of cows required antibiotic treatment for mastitis. This is now down to just 4% in 12 months. We do see other cases in the herd, but they self-cure with NSAID treatment and a little TLC.

It didn’t take a lot to convince me to install InVent, on the back of the results we’d seen with the ADF. Once I understood the additional benefits the technology offers, which go far beyond quicker and ‘kinder’ milking, it was a no brainer.’

Since the installation of InVent, milk yields have increased by an extra litre a day per cow, potentially gaining around 300 extra litres per lactation for freshly calved cows. The herd is currently averaging 11,300 litres of milk at 4.6% butterfat and 3.5% protein.

‘We also know our cows are being milked out more gently and completely – there are teat condition and udder health gains to be made here. And stress is also kept to a minimum – for the cows and also, ultimately, the person in the pit.

Kicking, fidgeting, defecating – it’s all reduced. And these calmer cows then go back out into the sheds to drink, eat and lie down. There must be other hidden health, fertility, productivity and efficiency benefits to be had here.

Cows should also, ultimately, complete more lactations in the herd. Only time will tell, but I’m excited to see more benefits become apparent as we move forward.’

Every farmer knows it is impossible to select a liner size that works for each cow and every individual teat. In a conventional milking cup, it is this compromised choice of liner sizing that means some teats will suffer from a poorly fitting liner. This in turn leads to several negative effects. With intelligent venting, the risk of congestion and swelling of the teat is significantly reduced because the ADF InVent milking cluster continuously controls vacuum levels on each teat individually.

ADF InVent introduces clean, filtered air into the liner to pull vacuum levels back into the safe zone enabling milk to flow as fast as possible compared to the conventional milking cup where the teat is congested and impeding milk flow. “Using ADF InVent showed a significant improvement in teat scoring assessed on multiple factors – ringing, congestion and colour,” says Ian Ohnstad, internationally recognised specialist in milking technology from The Dairy Group.

“Our customers with ADF InVent are reporting excellent results – all, without exception, said cows were calmer and quieter. Some are getting an extra litre of milk per cow, with one producer seeing yields increase by two litres a cow. And not only are the cows milking out fully, but they’re also milking faster and with significantly fewer cases of mastitis and lower SCCs. One producer has seen milking times reduced by 30 minutes – they milk three times a day so that’s 1.5 hours a day, or 548 hours in a year – equivalent to 68 eight-hour shifts.” says James Duke, ADF Milking.

To find out more about James Lywood and his experience with ADF’s InVent, make sure to attend the lunchtime workshop ‘Stress-free Milking for You and Your Cows’ during the BCBC Conference. James Duke will introduce the concept of “intelligent venting” to help combat the adverse effects of high vacuum levels on teat health, utilizing the new ADF InVent milking system. A breath of fresh air for stress-free milking – literally!

ADF Milking is proud to produce the market leading Automatic Dipping and Flushing system. ADF Milking are committed to improving cow health, with the award-winning product being recognised by dairy industry experts around the world for its innovation and technology.

It started with a vision to increase efficiency in post milking hygiene methods. At ADF Milking it is the needs and demands of their clients that drive and inspire them to innovate as a business. From the first prototypes in 2004 to the state-of-the-art system they continue to develop today, they have had a passion for improving cow health as a key driver for increasing farm profitability.

We would like to thank ADF Milking for their continued support of BCBC.