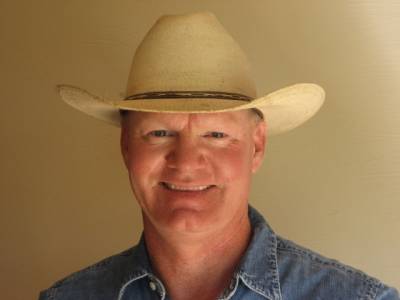 Speaking at the 2021 British Cattle Breeders conference earlier this year, John Maddux of Maddux Cattle Co, Nebraska told delegates that using a composite of British cattle breeds created the ideal cow for his 7500 head cow-calf operation. Maddux Cattle Co. farm 2500 suckler cattle and 5000 yearlings across 45,000 acres. Their aim is to produce an animal as near to 1000lb (454kg) at 18 months of age to be sold on to feed yards across the Mid-West. John said “In order to achieve what our market wants, we need early maturing breeds that are not too tall. British breeds produce an animal that is roughly 950lb at 18 months old. If they weigh over 1000lb we’re heavily penalised, so continental breeds don’t work for us”

The genetic makeup of John’s cattle consists of 3/8 Red Angus, 1/8 South Devon, 1/8 Red Poll, 1/8 Devon and ¼ Tarentaise. “The South Devon bring carcase and maternal qualities to the mix, whilst Red Poll have great fertility and calving ease. We use Devon because they’re suited to utilising grass, are early maturing and great fleshing and we use Red Angus over Black as they seem to have kept more maternal qualities.” said John. The Tarentaise, a French breed, are added into the breeding for their milking qualities, although John admitted that they can have slightly too much milk “We want modest everything – we don’t want anything too milky or with too much growth. They need to survive and raise a calf” John also breeds his own bulls, following the same genetic guidelines. He said “We’ve been crossbreeding for so long, our herd is very uniform but we’re great believers in crossbreeding. The hybrid vigour brings excellent fertility to the herd”

The operation relies heavily on the grazing of corn stalks and feeding of by-products in order to turn a profit and relationships are key to ensure enough land can be rented. John explained “There is a government policy encouraging the production of ethanol to blend with gasoline and so there are a large number of ethanol facilities across the mid-west” John uses the bi-products of these facilities to feed out to cattle over the winter, minimising costs. The farm’s home raised cattle, along with 3000-4000 bought in calves are turned onto corn stalks after harvesting, allowing them to forage any spilled corn and leaves and are supplemented with distillers’ grains. “Our aim is to achieve a modest growth of 1lb per day over the winter. We feed out directly onto the ground which reduces the need for infrastructure and therefore costs” Growing cattle are then turned out onto fresh grass in the spring. John said “By grazing our cattle on corn stalks and making them forage, we produce an animal that grazes really well and makes the most of our extensive system”

John also out winters his mature cows on corn stalks, but without supplementation with distillers grains. The calves have historically been weaned in October and their mothers put onto corn stalks until April, however, more recently, the farm has started leaving calves with their mothers until 11 months of age “The system works ok and is low maintenance” said John “We supplement the pairs a little as the cows are still milking but weaning a calf at 11 months is much less stressful for everyone. The calves also learn foraging behaviour from their mothers, making them better grazers.”

Although Maddux Cattle Co. is a large scale operation, labour is low, with only 7-8 cow boys employed. “We truck cattle out to rented ground and drive them back home, steadily, by horseback moving them once per week” said John “Most of our work consists of building and taking down electric fences”

Breeding a composite cow, from British breeds, to fit their system and resources has enabled Maddux Cattle Co. to keep maintenance costs to a minimum and out winter all their cattle. John said “In all the years of wintering cattle on corn stalks, we’ve only been snowed out 3 times and had to bring cattle home” “Our cows are a modest size, easy fleshing and have a good disposition”