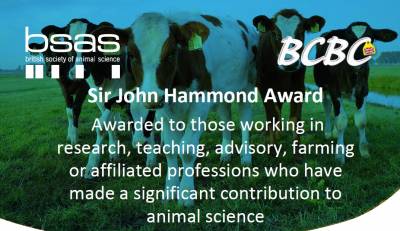 The British Society of Animal Science (BSAS) have collaborated with the British Cattle Breeders Club (BCBC) to re-launch the prestigious Sir John Hammond Award, which is awarded to those who have made significant contribution through research, teaching, knowledge exchange, breeding, farming, industry, or affiliated professions. Highly selective, the Sir John Hammond Award is based solely on nominations, with nominated candidates required to be of high merit.  Self-nominations are not considered, and any nomination must be supported by two members of BSAS or the BCBC.

This will be the Society’s first ever joint award with the BCBC, which Sir John Hammond founded in 1946. The club aims to improve the breeding of livestock, by promoting knowledge through collecting, collating, and distributing available information and data of practical and scientific interest, to breeders of cattle at home and overseas.

BCBC Chair Dr. Karen Wonnacott says she is ‘delighted that we have teamed up with BSAS to relaunch the highly respected Sir John Hammond Award. Previous recipients demonstrate the extremely valuable contribution made to animal science and we look forward to receiving outstanding nominations.'

The winner of this award will be announced at the British Society of Animal Science’s first ever virtual conference, taking place on the 12th – 15th April 2021.  Alongside a prize of £500, the winner will also speak at the much-anticipated BCBC 2022 conference next January.

‘The Society is extremely pleased to be working with the British Cattle Breeders Club, to relaunch this prestigious and historic award, and we look forward to celebrating the work of those who have made an exceptional contribution to the animal science sector.’ Maggie Mitchell, BSAS Chief Executive.

As well as founding the BCBC, Sir John Hammond was also the first President of BSAS, a charity that works to improve the understanding of all aspects of animal science and to ensure research and knowledge transfer has a practical and beneficial application. Always a leader in the animal science sector, he was the first to crystallise the theory of metabolic rate-dependent prioritising of nutrient partitioning between tissues, and the first to report the duration of oestrus for lactating cow and heifers.  With Arthur Walton, he was considered one of the pioneers of artificial insemination and a guru of the British livestock world and is widely regarded as the father of modern animal physiology.

For further information on the Sir John Hammond Award and to enter your nomination, click here.