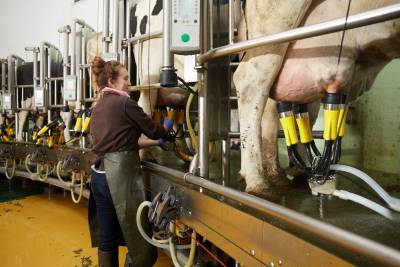 The Automatic Dipping & Flushing system from ADF Milking was developed by founder and engineer James Duke in 2003 when he had a vision to increase efficiency in post milking hygiene methods. By 2004 the first prototype system was installed on 10 farms in the UK, and in 2005 the Automatic Dipping & Flushing system was officially launched and was awarded the Prince Philip Award at that year’s Royal Association of British Dairy Farmers event.

Fast forward 15 years and ADF Milking is now the market leading product in automatic dipping and flushing and has been recognised by dairy industry experts around the world for the innovative technology. The company are proud to be helping thousands of dairy farmers in over 30 countries worldwide to improve the health of their herds and save money on vet bills.

This year ADF Milking were delighted to win their second Queen’s Award, this time for International Trade. They had previously won a Queen’s Award for Innovation in 2013. This achievement is the latest in a long line of international awards in four different countries.

“We are fortunate enough to be able to draw on the diverse experience we have gained from billions of milkings, performed at tens of thousands of milking points across the world – from large scale dairy operations to small owner-manager farms. The range and depth of this experience has helped us understand exactly what is needed in the challenging conditions of the milking parlour. We aim to achieve simplicity, efficiency and reliability - goals we believe we have surpassed to stunning effect with our unique ADF System," he says.

The award winning Automatic Dipping and Flushing system from ADF Milking helps dairy farmers to reduce mastitis cases, save time and money and increase the efficiency of their milking parlours. The ADF System automates a crucial part of the milking routine by automatically dipping a cow’s teats and flushing each liner between milkings. This automation removes the risk of human error and immediately protects the cow from disease.

The ADF System protects the cow against bacteria immediately after milking. Automatically dipping the cow’s teat before she is exposed to harmful bacteria in the environment helps to reduce mastitis and other infections. Each liner is then thoroughly flushed with a sanitising solution leaving a clean liner ready for the next cow to prevent cross contamination. The combination of automatic dipping and flushing helps dairy farmers to fight against mastitis and lower somatic cell count. Overall herd health improves as healthier cows move up through the herd.

Traditional post milking routines are time consuming and can be prone to human error. The ADF System automates the post milking process so that farmers can make substantial time savings. Typically, installation of the ADF System will result in significant improvements to throughput. This leads to greater labour efficiency and reductions in energy consumption and parlour running costs. By automating the dipping and flushing process, farmers can reduce the number of staff members in the milking parlour, freeing up time to be used more productively on their farm.

The ADF System allows farmers to save money on vet bills, antibiotics and labour costs which results in increased profits. Automatic dipping and flushing reduces the need for extra labour in the milking parlour, enabling their farm to be more cost effective. With the double action of keeping cows healthier and lowering labour costs, farmers will start to see the benefits of using ADF where it matters most – in their pocket.

Dairy farmers can maximise their parlour’s throughput by automating the dipping and flushing process. The ADF Milking System significantly reduces workload and operator movement, meaning that they can speed up milking time or reduce the number of staff members in the parlour. The Automatic Dipping & Flushing system creates a calmer milking parlour and helps cow traffic to run more smoothly. A calmer parlour means less stress for the cows and can result in improved milk let down.

The ADF System can be installed on any type of milking parlour – new or existing. ADF has experience in fitting their system across all parlour types, makes and configurations. The innovative design means that installation can be carried out between milkings, resulting in minimal disruption to the farmer and their herd. Immediately after the installation is complete it can be put into operation and farmers will begin to experience the benefits.

The significant financial benefits of cow longevity are often overlooked. Yield per year of life dramatically increases with each additional lactation. Heifers tend to be more hassle and yield less. They are also far less efficient as much of their consumed energy is used for body growth. Older cows know the ropes - they are easy to milk and are efficient converters of feed to milk. Excessive cost of replacements can be avoided by improving cow health and therefore longevity. The ADF System can play a considerable role in cow longevity and generate a significant impact on increased profitability.

“We are delighted to be a main sponsor for the British Cattle Breeders Club Conference in January. We know how important it is to support our British farmers, especially at times like this. We are very much looking forward to being a part of the event,” says founder James.