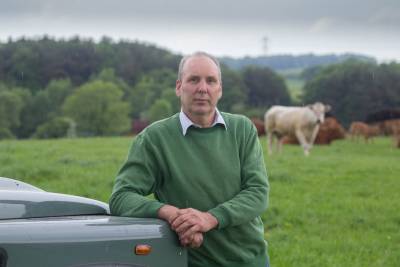 There are many ways artificial insemination (AI) can benefit beef producers. One of the main advantages is it allows producers with suckler herds to access high genetic merit sires with desired estimated breeding values (EBVs) that suit the herd’s breeding programme. This allows high rates of genetic improvement to be achieved. High genetic merit stock bulls can often be expensive to purchase, so purchasing semen instead can be a more affordable option. Sires can also be selected for different groups of females; for example, one bull for the heifers, a second to produce heifer replacements and a third to produce calves with superior carcase traits for the beef market.

Sweeper bulls are sometimes required, but AI can potentially reduce the need to keep bulls on the farm. This can be an attractive incentive because the maintenance cost for a bull can be around £45 per calf born, in addition to the purchase cost, which for top bulls may be prohibitive. AI also avoids the potential health risks associated with using natural service.

The choice of bull for the females being served is vital. It is important to check the EBV for calving ease (direct), as this indicates how easily a calf sired by a particular bull will be born. Herd management should aim to reduce the risk of calving difficulties because they have a negative effect on subsequent cow fertility and calf performance. Many other EBVs are available to help producers select bulls that will produce progeny to fit the farm’s requirements and complement the females in the herd.

Edward Dean and his son Ollie are part of the AHDB Strategic Farm programme. Since joining the network in 2017, they have had the opportunity to access and utilise information from AHDB specialists and independent consultants, which has helped Edward to develop the business and make informed decisions on the farm. Now with their suckler herd of 130 cows, and four Limousin bulls, Edward has been focusing on improving his herd’s breeding plan with the use of AI.

Edward says: “We have struggled in the past to buy in replacement heifers which had a high health status. The cows were losing their milking ability, so I wanted to breed our own replacements to improve maternal traits. We were also finding that there was no distinct gap between spring calving and autumn calving, it just seemed to be one extended calving period. As well as being difficult to manage, the uncertainty of when they were going to calve meant that we couldn’t group them together to feed them appropriately prior to calving.

“We had previously tried using AI with synchronisation, but when we became strategic farmers with AHDB in 2017, we received support to try AI to a natural heat with the use of an Allflex SenseHub. We use this monitoring system to help us track the health status, reproduction status and well-being of individual cows.

“Once we got the hang of using the Allflex SenseHub, we used a technician to AI in June 2019 with a trial group of 40 cows. The conception rates were good; 68% held to the first AI service, and 11% held to the second AI service – the cows then went in with the bull and he got another 13% in calf giving us a total of 92% in calf by scanning. Previously, using synchronisation, we achieved a conception rate average of 60% over four years, so we were delighted with the results and we are hoping to be able to repeat that again.”

Edward continues: “The calves looked really good and grew well. The AI usage has given us access to bulls we wouldn’t usually be able to afford to buy, as well as giving us the choice to select from a variety of elite bulls. We have used a couple of different bulls for the AI, all the bulls are selected on EBVs for their maternal traits, but the better, more expensive bull we matched to our better cows. It will be another two years before they will get their opportunity to prove whether this has worked; when we breed from this year’s heifers and see the maternal traits come through. On the other hand, the calving period has improved; we now have a distinct gap between spring and autumn calving, and we have certainly been pleased with the conception rates. So, from the results we have seen so far, it has been worthwhile.”

Taking it into your own hands

In an effort to encourage greater use of AI in the suckler herd, AHDB Beef & Lamb provided 50% funding towards DIY artificial insemination (AI) courses for suckler producers with over 30 breeding females. The subsidised courses had fantastic uptake and saw some really positive results for farmers wanting to get more involved in improving their herd’s breeding plan.

Gavin Ogg did the course in November 2017

North Lincolnshire based Gavin Ogg has a suckler herd of Pedigree Limousin cattle consisting of 80 breeding females. After using an AI technician for several years, he took the opportunity to do the AHDB subsidised AI course in November 2017. Gavin said: “I had looked into doing the course before, but it was so expensive, so when I saw it at a reduced cost, I was really pleased to give it a go. For a three-day course, the trainer was able to cover so much, and I got a real understanding of the whole reproductive system and how AI worked at its best. When I went to try it myself at home, I had a few that did not hold at first, but once I got more used to it, we had some good conception rates. I still work alongside a technician who helps me to synchronise the heifers and then I tend to AI the cows and the technician helps to AI some of the trickier heifers. It was a really good feeling when the first calves arrived that I had AI’d. The process also gives you more control to select for specific traits, such as ease of calving, which is something we have been aiming for.”

Sophie Bouldlynch did the course in August 2018

Sophie has a herd of 60 Devon x Hereford suckler cows which she farms at home in Devon. She took the AHDB subsidised AI course in August 2018 so that she would be able to help out more on the farm and share the responsibility, especially during busy times such as silaging when staffing can be stretched. Sophie said: “The course was very beneficial, and I got a real understanding of how AI worked as well as being able to have a go and get a feel for it in the practical sessions. When I had a go back home it seemed more difficult at first, but the more I did it, the better I got.”

Leona Woodcock did the course October 2019

Leona runs a small holding in North Lincolnshire where she has a small herd of Pedigree Simmental cattle as well as helping a neighbouring suckler farmer when required. She took the AHDB subsidised AI course in October 2019 after being recommended by a friend to study at Bishopton Vets. Leona said: “I was wanting to use AI because it was very expensive to run a bull for my small herd, and learning how to do it myself has proved much more cost-effective, plus I have always been interested in genetics and AI gives me the opportunity to match the different bulls to my females based on EBVs. The course was really in depth with day one being all about the theory and then day two and three giving us the chance to try it out for ourselves. I served my cows myself in March this year and they all held at first which was reassuring, however, one then lost it so I had to re-serve her. It is quite different when you try it at home for the first time, but I have also been practising on other nearby farms so I can keep my hand in. I also used sexed semen on the cows to breed some replacement heifers to keep the herd going.”