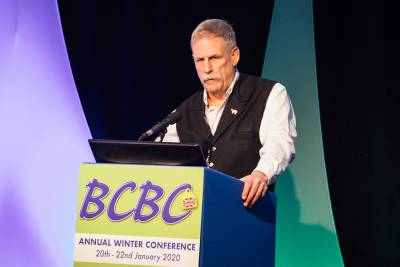 Dr. Bart Lardner from the University of Saskatchewan spoke on the impact of maternal nutrition during gestation 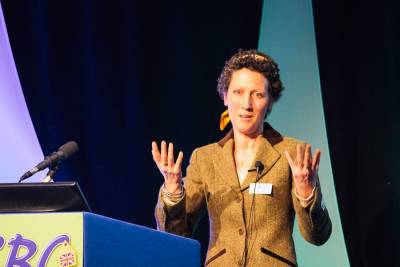 Sustainable succession was a central theme in all the presentations at the 2020 British Cattle Breeders Conference, which took place between January 20-22nd in Telford, Shropshire. The sustainability of the industry, beef and dairy production and the future plans of those working in the industry, were all topics that were discussed. As usual, question and answer sessions were lively, and the industry Q&A session during the annual dinner made a welcome return.

Research shows that when it comes to food, consumers want ‘trust, traceability and transparency’, according to Roddy McLean, Director of Agriculture, NatWest, who opened the Beef Day at the BCBC Conference. Although farmers are trusted by consumers, Roddy stated that farmers currently aren’t good at communicating their values and that taking part in activities such as Open Farm Sunday were key to helping showcase the best of British farming.

There are challenges facing farmers across the board, he stressed, and beef producers need to ensure that both their businesses and themselves, are ‘future fit’. He stressed the importance of budgeting and benchmarking, and then making use of this information to guide business decision making. Roddy also recommended that businesses ring fence quality time for the management team - be that with key staff and/or family members – to meet regularly and discuss an agreed agenda, with minutes taken, in order to a set a timeline for actions. He also suggested holding regular meetings with staff and making sure that business aims were effectively communicated to all employees.

Sophie Throup, Senior Agricultural Manager at Morrisons, gave a retail perspective on developments in the industry, covering what was important to the consumer and how this is affecting the industry. While food safety is the number one priority for UK consumers, supporting British farmers was number two. Animal welfare continues to rise up the consumer agenda, moving to number four in the list.

The environmental movement continues to gather pace across all ages of consumer, with the offering of meat-free meals growing and overall meat sales falling compared to their 2017 level. Sophie explained that 94% of households eat meat and fish on a weekly basis; so people are still eating meat on a regular basis, but just less of it. Sophie acknowledged that the nutritional density of meat is a key part of the debate.

Dr John Crowley, from AbacusBio International Ltd, explained in his paper titled ‘How heavy is too heavy?’, that, for a typical UK beef farm, there is an optimum breeding female mature weight in the range of 680kg to 725kg for cows; depending on assumptions about the cost per unit of feed for heavy cows.

In a situation where marginal feed costs are high and/or heavy cows (>700kg) can’t be maintained on the feed resources available (e.g. hill country/upland farms, where bigger cows might need to be fed an imported higher quality and higher cost diet), then optimum cow weight is 680kg. In a situation where heavy cows (>700kg) can be maintained on the grass resource available, then the optimum is 725kg. This optimum is also heavily influenced by the weight at which penalties are applied for over-weight progeny carcases.

What you feed your pregnant cows matters more than you think, said Dr Bart Lardner, who spoke about the impact of maternal nutrition during gestation on subsequent progeny. Dr Lardner, a Professor in the Department of Animal and Poultry Science at the University of Saskatchewan, explained that high fat diets over gestation resulted in heavier calves at birth and at finishing; suggesting this is possibly due to developmental programming. He also stressed the importance of knowing costs of production in any system and acting on this information.

Have we reached a plateau in non-genetic improvements to meat eating quality and where will the next steps come? This was the question posed by Dr Michelle Judge, from Teagasc, Co Cork. Despite the extremely controlled conditions in abattoirs, large variabilities in meat quality persist and Dr Judge argued that genetics undoubtedly contribute to this variation.

Dr Judge went on to explain how meat is tested for tenderness, juiciness and flavour and that results show consumers preferred the meat from those sires classed as positive for eating quality. Ireland, which is the fifth largest exporter of beef in the world, needs consistent quality for these export markets and it will launch meat quality EBVs for AI sires with the hope of identifying superior sires.

Three farmers spoke in the third session of the day and each highlighted how they have put profitability and sustainability at the heart of their future business plans.

Suckler farmer Mike Powley, from Oak House Farm, Green Hammerton, Yorkshire, gave an update on the unique breeding programme at his farm and how he plans to make the farm sustainable for both animals and the soil.

Five years ago the decision was made to grow the business and Mike has concentrated on three key areas: infrastructure, genetics and soil. Previously, farm buildings were tired and too much time was taken moving feed and stock between various sites. A new unit has been built to provide the best accommodation for cattle, with a special focus on handling facilities.

When developing a unit that suits one man working with 150 cows, Mike is looking for docile, fertile, easy calving, long-living cows that will produce good quantities of high quality milk, as well as fast growing calves. He has been crossing his South Devons with Norwegian Reds to produce a great multiuse breed that fits his requirements well.

Another of Mike’s aims has been to rebuild topsoil at the farm by running a no till, minimal disturbance system. The rotation of three years red clover, two years of wheat, followed by a cover crop, spring beans and two years of arable has worked very well, as proven by the soils ability to absorb water this very wet season.

David and Maggie Kelly, from Nether Hall, Kirby Lonsdale, Cumbria, spoke about their move from Limousin to Hereford, after a trip to New Zealand, where they visited a block calving herd.  They have now simplified their system and have a Hereford spring block calving herd, with cattle that are good converters of feed, utilise spring grass well and are great rotational grazers. The cattle in their system are now easy to handle, calve easily and calve outside, all of which help to make their system more sustainable.

Ben Harman, from Grove Farm, Chesham, Bucks, has developed a system of Chagyu (Charolais x Wagyu) beef that produces a repeatable, quality product that meets the needs of his customers. Farming on the urban fringe of London does have its drawbacks but also places him close to some very discerning customers.

The crossing of the two breeds brings the strengths of the Charolais breed (weight for age, quality, temperament and conformation) and the strengths of the Wagyu breed (docility, perception, marketing advantage and point of difference) into one product. Ben stressed that beef can’t compete on price with chicken and pork, so needs to have the quality to differentiate the product.

Martin Thatcher, from Thatchers Cider, Sandford, Somerset, spoke about some of the key lessons he learnt growing the family business and building a sustainable future for staff and his family. He explained how really listening to the customer had helped to shape the direction and development of his business and Martin also stressed the importance of getting second opinions from friends, family and consultants when making important business decisions.

The UK livestock industry does pretty well with its carbon footprint compared with the rest of the world, but we do see huge variation within our systems, said Dr Jude Capper, concluding the line-up of speakers at the Beef Day. She explained that we have a huge opportunity to change and demonstrate to consumers the good work to be done.

This change can come about by improving our KPIs – feed efficiency, growth, fertility, longevity, maternal traits - which will then have a knock-on economic benefit. These KPIs works differently for different breeds on different systems/geography, but there is room for progress for all.

The livestock industry needs to have the consumers trust in what it does and what it produces. The way people receive information has now changed, with the days of the peer reviewed publications long gone and the vast majority of information available to the consumer now coming from people’s phones. About 82% of 16 to 24 year olds access their news/information from blogs and through social media, where the balanced nature of information can be called into doubt. It is important we keep meat and dairy products in the diet of this age group by providing short, simple messages with a few key facts and highlight the long tradition of farming.