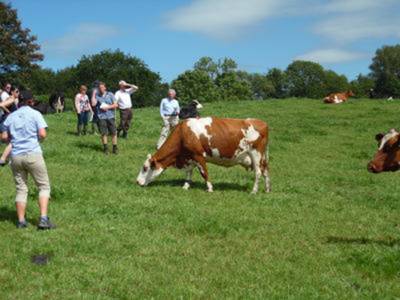 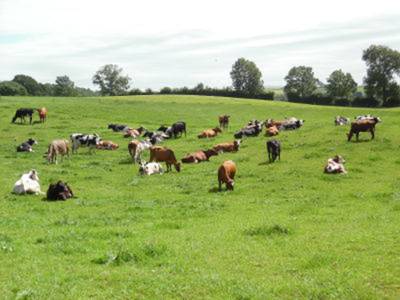 The annual British Cattle Breeders’ Club Farm Walks were held in the South Lakes on a fabulous day at the end of June. The lush grassland and superb stockmanship of the Park family’s dairy unit along with the Geldard family’s beef and sheep business put the spotlight on Cumbria’s reputation for exceptional cattle farming. Both farms participate in Stewardship schemes to enhance the environment, and get close to their consumers by running a farm shop.

John and Marjorie Park have been National Trust tenants at Low Sizergh Farm since 1980. Now it is son, Richard, who manages the 170 cow autumn calving dairy unit, while his sister, Alison, has responsibility for a farmshop and tearoom which takes maximum advantage of their scenic location. Since the turn of the century Richard Park has moved from a 10000 litre Holstein herd, milked three times a day, to crossbreeding. Production is now 7000 litres per cow, essentially from a Pro-cross type cow, although there is some further experimentation with Jersey and Brown Swiss.

Unsurprisingly, milk quality is high at 4.44 per cent butterfat and 3.46 per cent protein. Most of the milk is sold to Dale Farm, although some is made in to their own brand Kendal Creamy cheese and ice-cream for retail. Cows are bred to make best use of forage, and attention to detail on the grassland management includes use of a plate metre to optimise grazing.

Beef breeding stock and other livestock

John Geldard and his sons, Richard and Charles, have added value to their livestock enterprises through sales of breeding stock for many years. The original pedigree Charolais cattle herd has been replaced by Stabilisers. The 450 owned acres at Low Foulshaw, plus off-land, is now shared by 150 cows, plus 1000 Lleyn ewes and 120 pedigree Charolais sheep.

To generate cashflow when the farm was purchased in the late 1980s, a laying flock was established. Today the farm’s packing unit grades and markets one million eggs every week. This enterprise provided a fascinating contrast to the ruminants. The rate of genetic progress, overall efficiency and tight business management made everyone recognise the untapped scope open to the cattle sector.

The move to Stabilisers has given a more fertile, easy calving, cow. Breeding heifers at a younger age helps moderate mature cow size. Males are either sold for breeding, or can be finished at 12 to 14 months of age from a high forage diet. A trial batch of summer-housed cattle produced better returns than their grazing counterparts. Even so, there is on-going debate in the family about employing such a system routinely.

Discussion and exchange of knowledge

The day threw up some intense discussion about the merits of multiple breed crossing, compared with first generation-cross dams bred to a terminal sire. In all instances the programmes have to be rejuvenated from a pure source.

Currently it is the pedigree foundation stock which benefit, directly, from the era of genomics. Cattle breeding is moving through fast evolving times, and breeders can continue the discussion and exchange of knowledge at the Club’s Conference in January 2016.